Ba Den Mountain is not only famous for the title “roof of Southern Vietnam” but also attracts tourists from near and far by long-standing legend.

Long time ago, in Hoang Hoa district (now Trang Bang district), there was a girl named Ly Thi Thien Huong who used to worship Buddha every full moon day. Although her skin was dark, her charm and talent took the hearts of many people. In particular, a talented scholar named Le Si Triet fell in love with her. However, a son of a mandarin in the area at that time determined to find a way to kidnap her as a concubine. Amid tragedy, Le Si Triet helped her brake out and was promised by her parents to marry her in deep gratitude.

The dream was beautiful but then a battle emerged. He set out to enlist in the army, she stayed and waited for the reunion. One day, she went to the mountain to pray, when she returned near the foot of the mountain, the servant of the son of the mandarin suddenly jumped out to catch her. She dived into the pit to commit suicide. Three days later, Ly Thi Thien Huong omened in a dream for the abbot on the mountain: “I am Ly Thi Thien Huong, when I was 18 years old, I was chased by a servant of a son of the mandarin in Trang Bang and I jumped into the pit and passed away. Thanks to the austerities of the past few lives, my soul is transcendent, attaining magical power. Although it has been 3 days but my body is still intact. Please down the southeastern slope to find my body to bury for me.” According to the dream, the abbot found and buried her. Then she omened many times to warn people about natural disasters and wild animals. In return for the favor of the Lady, the abbot and the people in the area made a statue to worship.

The second legend about Linh Son Thanh Mau (Linh Son Holy Mother) relates to the life of King Gia Long. At that time, when Nguyen Anh was chased by Tay Son troops to this land, he and his soldiers were in danger, so they were told to looking towards the mountain and pray, they would be helped by her. That night, when he was sleeping, he was told in his dream the way to escape and to find food; this helped him and the soldiers escape from Tay Son army. After King Gia Long ascended the throne and recalled the old story, he ordained Ly Thi Thien Huong as Linh Son Thanh Mau, presiding over Linh Son Tien Thach Tu, located on Mot Mountain, which is Ba Den Mountain today. 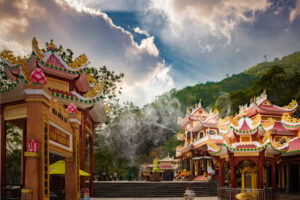 The ancient stories of the holiness of Linh Son Thanh Mau, as well as the ancient features of the hundred-year-old pagodas, give this place a mysterious beauty. Today, exploring Ba Den Mountain is no longer a journey only for those who are physically fit. Old people and young children only need 5 minutes to travel by Ba Den cable car to admire her statue and listen to the legends. Ba Den Cable Car opens on January 18, 2020, promises to give visitors to Ba Den Mountain Spring Festival a safe and fast option to travel to discover the Roof of the Southeast. 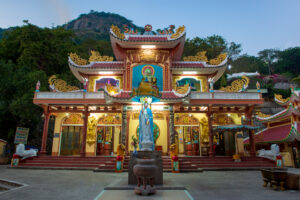 DISCOVER THE ROOF OF THE SOUTHEAST 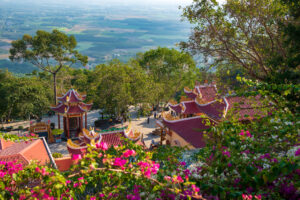